I arrived the day before the conference in Vilnius. In part because it took a some time to fly there and also because of a .NET user group which hosted a meetup at the hotel. The group used this opportunity to invite the international speaker that were already at the conference to do a presentation at their meetup.
The venue was in the Radisson Blu hotel in Vilnius. It was nice to roll out of bed, get breakfast and be able to watch the first talk. Being this late in the year the weather was not as nice and with day light savings time it was dark outside at 16:30.

Next to all the talks there were lots of booths for sponsors, competitions, food and artists who drew caricatures of you. Proof I was there: 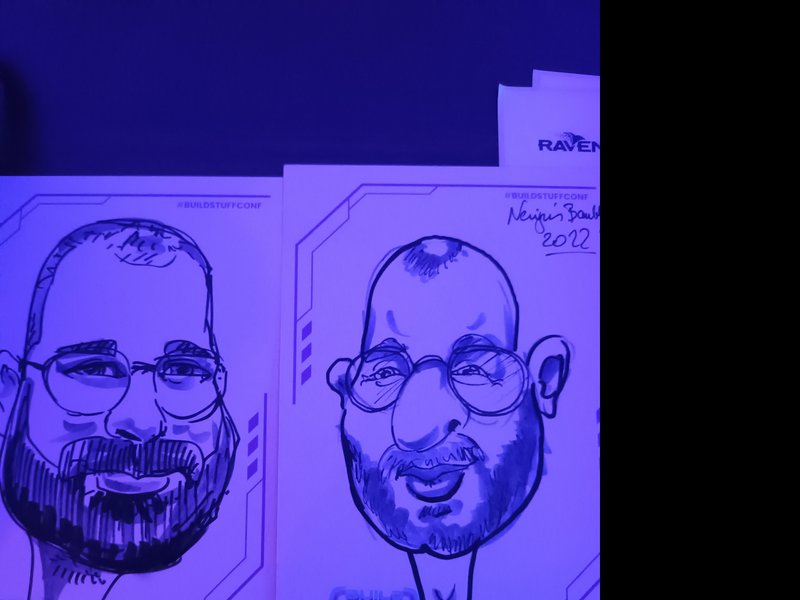 After the second day there was an after party at a different venue. They had a DJ who created music via code, an all developer band from Lithuania and "Dylan Beattie and the line breakers" 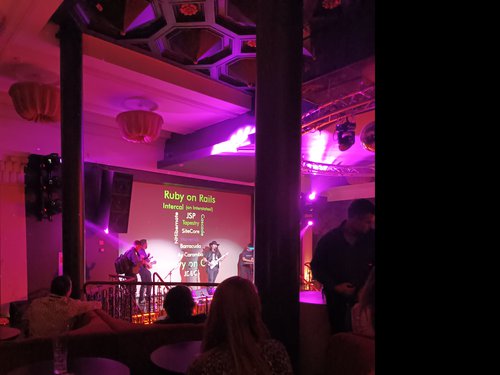 Pictured performing their song We're going to build a Framework

Overall it was a great conference and I hope to be able to visit it in 2023 as well.

Over the 3 days I went to around 20 talks and took notes on most of them. Here are my summaries for what I think were the important ones and the ones I still have the best notes of.

Add intentionality to your code

Organizing code by architectural fucntion is a bad way to structure your project and will leave a messy structure. It is like organizing a collection of cars by the individual parts..

Design patterns were originally created by an actual building architect. Gang of Four wrote book in 1999, those patterns were used to solve problems from those times. They were templates for common encounters in code. After that came Doanlad Knnuth with Literate programming. Combining a code and documentation language.

Software is a constrained from of literature. It communicates solutions from programmer to programmer in code that is executable by a computer.

Every character that you type matters.

Code that is with thought and intention is good code.

Use white space to add together code on a subject, just like a paragraph.

Complexity of an application should be atmost as complex as the problem space it inhabits and not bigger.

Design is temporal, only valid in current context. Example were telephones and walkmans. Design was revolutionary but now very old

Structural design is often too big and too comp;licated.

Be at war with complexity.

Ask why does this code look like this and what does it do? You want things that do different things to look different

Code that you can not debug easily is bad code.

Intentionally is caring about the cost of abstraction.

file.open() is an example of good abstraction as it takes care of the difference between HDDs and SSDs.

Take more time to think about what you are doing instead of just doing it.

Talk was based on Microsoft Orleans which is a .NET framework for Actors.

How actors change up distributed systems, we want programs to talk to each other.

RPC → Complexity hidden behind a façade for developers. Pretend to work local as local procedure call but then in a distributed setting

Streaming services such as Netflix have to use other protocols as they can’t keep connections open forever.

Actors instead of objects

Can be stateful or stateless

Have an identifiable address

Reacts to message by:

Analogy on Actors by using speaker and audience

Message is not the same as a method call

A message may not return a response but could trigger something in another Actor.

This talk was done without any slides as there were issues with connecting to the screens.

Agility is the way we ended up getting measured. Agile manifesto started the agile methodology.

When a company says “We are doing Agile” You know that they don’t grasp the concept.

Agile is an umbrella term not a single process you can do.

Agile is an adjective, it is an observation you can make. Team A is more agile than Team B.

You can do Scrum or Kanban but not Agile

The Agile Manifesto mentions it is not a process, it is an attitude. Agile is a continuous process.

When we measure teams we use words like “Productivity”. Productivity comes from factories. When you say “I am more productive” what you are actually saying is “I am more like a factory”.

We can easily estimate the physical world but not the abstract world of software. You can estimate when a car will arrive travelling at a certain speed, but not when that feature will arrive.

Lines of Code is a bad measurement. The only thing Lines of Code will tell you is the lines of code, it is worthless without context. It can only show what cognitive load developers have to deal with. In relation to 100k LoC vs 1 million LoC.

Developers are problem solvers and they are creative. If you measure them by LoC they will give you more code but not more value.

What is a story point?

An arbitrary unit of measure to distract us from the deadline.

“How long will this take?” We can’t answer that neutral if there is a deadline placed already.

Estimates can be done in manufacturing. The 1001 widget will takes as long as the 1000th. In software will already fixed the manufacturing issue, it is called the compiler. If you want exactly the same thing you just need the same input.

Software is about the design problem. Software will produce different things, else you could just copy it again.

We don’t know how to estimate because it is a new technology for us.

Then how can we measure?

Features over time. Where feature is defined as delivered functionality.

But that is still like saying “I am having another drink. How big is the drink? I don’t know”

Another measure is velocity. Teams start comparing velocity on story points, which use different currencies. They then end up obsessing over a number.

If you put too much pressure on a number, it will fight back.

When a measure becomes a target, it ceases to be a good measure - Goedhart’s law

Coverage is not a good measure. It does not measure how good your tests are, it just measure that code is covered by a test. It does not take in consideration assertions in tests.

What is a better measure? Velocity

Velocity is not just how fast you are going

You are on your way to visit a friend an he calls you. “Where are you?” I am travelling 100km an hour. “But which direction?” North “But you need to go South!”

Velocity = A distance + a direction

Are we building the right thing? “No, but we are building it fast”

This talk was based on 6 lines of codes which each called different thrird parties without any error handling. Jimmy demonstrated what could go wrong and what you could do to counter that.

6 lines of code in a tournament order system sparked this talk.

It was code that placed an order, took customers money and send out an email.

All wrapped in a single Transaction

Not what happens IF a call fails but WHEN

You can’t wrap all calls in the transaction and hope to catch it. Plan for the worst

“Your coffee shop does not use two-phase commit” 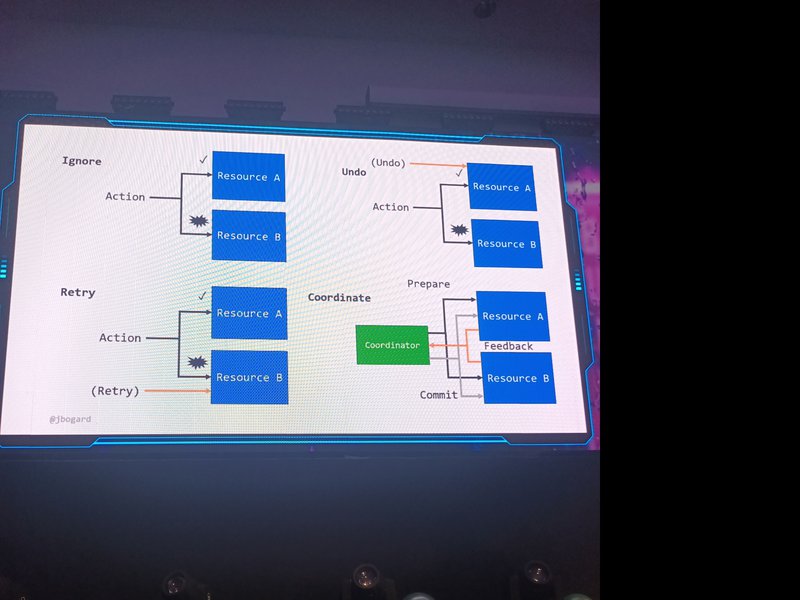 Saga pattern - Series of atomic transactions with undo and rollback. Example: Booking a vacation with hotel, flight and car rental. When vacation is cancelled each step can be cancelled as well.

Process manager pattern - Orchestration(commands) vs choreography(events). Can be a mix in a system

These patterns are mentioned in the book "Enterprise integration patterns"

Developers are drawn to complexity like moths to a flame, often with the same outcome. (from The Productive Programmer) - Neil Ford

“I can solve that problem, but I can also make it more interesting”. We(SWE’s) can always find something more complex.

Technical debt in itself is not a problem such as that debt is not always a problem.

If the (technical) debt is managed and structured, it has a repayment plan and period, it can be used to create things faster.

If you don’t have that in place, what you have is not technical debt but technical neglect.

Software development is a process of knowledge acquisition.

Later on in a project you could acquire the knowledge you needed a few weeks ago. This is when you would refactor something.

Refactoring = change made to software to make it easier to understand without changing it’s observable behaviour.

Refactor = To restructure software by applying a series of refactorings

95% of refactoring challenges have been fixed by tools, the 5% that is left is caused by the developers. Refactoring can be largely automated with IDE functions such as “Extract method”

Muphry’s law → "If you write anything criticizing editing or proofreading, there will be a fault of some kind in what you have written.”

Talk is based on the book Atomic Habits by James Clear

If you went to this talk, you want to become a better developer

Crave: Learn with a colleague, join a culture that promotes learning

Response/Easy: Listen to 1 chapter of an audiobook at a time. Do 1 coding kata.

Satisfying: Share interesting points with colleagues, start a discussion on the topic.

It is the reverse of creating a good habit

Architecting in the Cloud for sustainability - Sohan Maheshwa

How to architect in the cloud for sustainability

What you build and use in the cloud has a carbon footprint.

Scope 1: Any fuel that is consumed at the source. A car burning oil and gas.

Scope 3: Everything else. Energy used by your consumers and suppliers.

AWS reports an 80% reduction of CO2 when moving from traditional data center to the cloud.

This differs per region, EU and Asia are 5x more efficient while USA is 3.6x times for efficient.

Cloud providers are responsible for the sustainability OF the Cloud

Customer is responsible for sustainability IN the cloud. Don’t run the biggest machine for the smallest workload.

Sustainability is a continuous focused effort on energy reduction.

Example case: 2 zones with machines at 50% capability so that there is a failover capability left.

Better would be to run 3 zones at 75% so that 2 other zones could pick up slack of the failing one. This leads to better utilization of resources. First has 50% idle while second has 25% idle.

Negotiate impact friendly SLA’s. Put it in your SLA’s to use the lowest impact zones.

Architecting for peak usage is expensive. Better to lower the peaks and thus lowering computational needs.

Async, queues, buffers and scheduled jobs reduce peaks. However everyone runs their cronjobs at midnight, which creates a peak for the Cloud.

Think about accessing and storing data. Cold storage is cheaper and more sustainably than keeping everything in hot storage. Use lifecycle policies for this.

Use optimized data formats such as AVRO to store data instead of CSV or JSON.

AWS reduced their storage by 1 Exabyte by switching to a different compression algorithm.

Reduce build artifact size. This will speed up your builds and pipelines and will also lower carbon footprint.

Make sustainability part of your whole process. Report on metrics during deployments.

Report carbon data to leaders and customers so that they can do something with it.

Use the AWS well architected service to lower carbon footprint.